Equi-SMART is supported and represented by many amazing people in the horse industry. We are proud to have ambassadors that utilize Equi-SMART’s massage therapy programs for their horses, and share their great experiences with friends and people that they meet. Meet our ambassadors, follow their pages, and check out their testimonials of success with Equi-SMART’s programs!

*WE ARE CURRENTLY LOOKING FOR FOUR AMBASSADORS TO JOIN THE TEAM! APPLY AT THE LINK BELOW!*

Melia has been riding horses for 20+ years. She started in the APHA circuit riding western pleasure, horsemanship, and showmanship. Then she dabbled in the pony hunters before spending a great chunk of her riding career on reining horses. For the last five years she has both competed in and volunteered with the Retired Racehorse Project at the Thoroughbred Makeover in Kentucky. Her makeover horses competed successfully in a variety of disciplines including competitive trail, foxhunter, hunter, jumpers, and ranch work.
In 2021 Melia will be returning to the reining pen with two of her personal horses. When Melia is not riding horses, she can be found at work teaching English online to children in China as well as working as a speech therapy assistant at an elementary school in Rama Ontario. This year one of Melia’s ambassador horses will be “Tinseltown Gal”, known as Miley around the barn. She is Melia’s 5 year old reining horse, who she hopes to compete in derbies with this year.
Melia firmly believes in all methods of therapy for her competing horses, and has a great relationship with her vet, chiropractor and massage therapist to keep her horses’ newly developing muscles functioning at their peak. 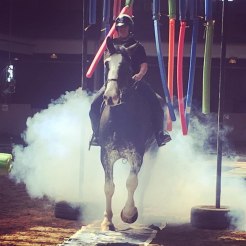 Laurie has been riding horses since she was a little kid and owns a horse farm in Waterford where she has her two OTTB geldings and boards retired horses. Laurie shows the hunters and jumpers, enjoys the occasional wine ride and obstacle course. Laurie has an keen interest in Thoroughbreds and breed competitions. She has competed in Kentucky in the Thoroughbred Makeover and the Royal Winter Fair in the breed classes. Her horses are named Doughnut (Rising Dough) and Tappy (Tap Show). Laurie works full time as a Mounted Police Officer.

Kaeleigh is 21 years old and has been riding horses her whole life. She competes in barrel racing and pole bending at multiple different clubs including OBRA, NBHA, North River Riders, NBRC, and Turn and Burn. Kaeleigh has qualified for and competed at in the past at the NPBA Worlds, NBHA Open Worlds, NBHA Youth World, and All American Quarter Horse Congress. She hopes to return to as many of these in the future as she can.

Her current show crew includes the semi-retired good ole reliable Sizzle, right hands man Cash, and up and coming OTTQH Chex who will be hauling along Cash. Last but not least, Pipher will be coming along for a few shows to run for her first year running.

Kaeleigh is in her final year of vet tech and following graduation will be an RVT (registered veterinary technician). She is also enrolled in the SMARTcert Practitioner program and will be beginning her own business in equine massage therapy. 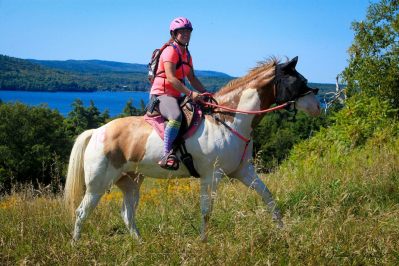 Ashley was first introduced to horses at 8 years old when she was sent to horse camp to get over her fear of animals. Since then she has participated in a number of disciplines from rodeo, hunter/jumper, eventing, fox hunting and has travelled North America with the Canadian Cowgirls drill team to events such as Equine Affaire and the Rose Parade in California. Ashley is looking forward to another endurance season with her two horses, Splash and Harley, as well as introducing new riders to the sport.

Julie has been riding horses since she was a kid, originally starting out in the hunters. She made the switch to western six years ago when she bought her gelding Chevy. Originally, she was hoping to do barrel racing with Chevy. But Chevy decided that going fast wasn’t in the manual. Now, the two enjoy ranch riding, western trail, and maybe one day trying some working cow activities. Chevy’s conditioning remains a top priority for Julie and she regularly keeps Chevy happy and healthy with massages and exercises.

Robyn is the owner and operator of Triple R Ranch Equine Assisted Learning Centre in Priceville Ontario. This is an equine facility with special equine education and a riding program for people with special needs of all ages. Robyn is the author of the children’s book “The Adventures of Tuffy…A Little Bay Horse”. She works as a leader for Weight Watchers in Flesherton Ontario. Robyn devotes herself to helping people with mental and physical needs, brain injuries, PTSD, developmental challenges, etc. all using partnerships with horses, after she herself rallied back from a traumatic brain injury as the result of a motor vehicle accident in 1991. Robyn is competing with her horse Angus in the reining and reined cow horse arenas. Showing again and learning how to memorize and ride patterns has been a big accomplishment for Robyn. She holds the Canadian Pro/Am freestyle reining champion title, as well as many other top awards in reining and performance horse disciplines.

Taylor has been riding since she was 4 years old. She started riding English, but switched to try riding Western and took off from there. When she tried barrel racing in 2006, Taylor found that she loved the thrill of riding fast, and in 2008 discovered the sport of cutting and knew it was going to become her focused discipline.

This year Taylor will be mainly showing in cutting and sorting. Her mounts are all AQHA horses: she has a 14y/o mare “Sweet Frecklena” (Kat) and a 25y/o gelding “Maderas Dandy Jewel” (Danny), as well as 23y/o mare “Hot Stepping Lacy” (Lacy) for the odd barrel run.

As an RMT herself, Taylor understands how good it can feel to have a professional massage performed, so she is looking forward to see how combining chiro and massage together will aid her horses’ performance and comfort.

Alysha started working with horses when she was gifted a TBx. She worked with this horse from the ground up using natural horsemanship and Reiki (an energy healing modality that improves a horse’s mental, emotional and physical wellbeing). She has been working through her business to help horses with her talents as a Reiki Master and animal Reiki practitioner since 2017.

Alysha currently owns a 16 y/o QH named Ted, and takes part in barrel racing, pole bending, and hacking, and is looking forward to becoming an endurance rider in the near future.

Kathleen started riding at the very young age of 2, and has been obsessed with horses ever since she can remember. She loves every aspect of riding and has dabbled and succeeded in a number of disciplines – from bulldogging to hunters. She currently has a young 3 year old QH named Presley that she is bringing along. Due to a streak of concussions Kathleen is slowly taking her time and is hoping to eventually be competitive with Presley, but enjoys the slow process of getting to know him – he’s such a character!

Shae began riding at a young age and has been growing her passion and obsession with horses since receiving her first pony Bear as a gift for her 4th birthday. Since rehabbing her gelding Houston from a tendon injury in August 2017, Shae has invested more time into learning how to provide the best possible care for her horses. In 2019 Houston began a slow restart into competitive barrel racing and pole bending with great success. Shae is also raising her 3 year old gelding Dallas to start him in the 2021 season on the patterns.